On the days when you seem to be ineffective, it’s usually because you’re tired, struggling to focus, or because of all those distractions around you. But, apart from these obvious reasons that hinder your productivity, there’s another, a bit unexpected element that can affect your productivity – your time zone. Unbelievable, right? Well, the studies show that there’s a link between time zones and employee productivity.

Now, this doesn’t mean that you get to blame your geolocation for not finishing your assignment on time. However, shedding light on this subject can surely help you have a better understanding of your working habits. In this article, we’ll explain how exactly time zones influence your productivity, but also how you can improve your effectiveness regardless of your time zone. 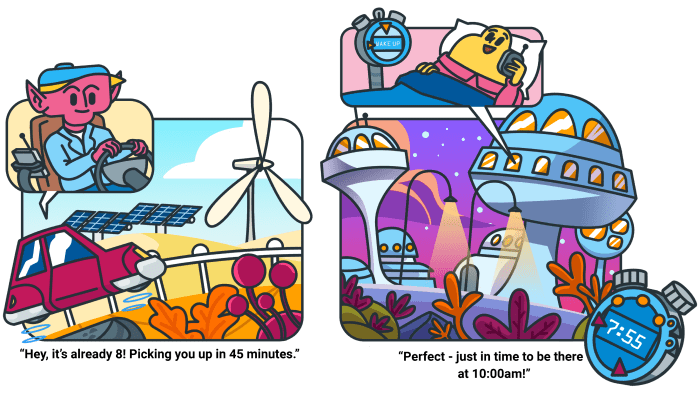 What time do you usually wake up? Even though you may think that this depends just on your own sleeping habits, another crucial factor is your time zone.

So, according to this study, in the USA, employees who live in the Central and Mountain time zones are more likely to get up at 7 am and start working at 8 am. In addition, workers from the Pacific Time Zone are more likely to be awake at 7 am compared to those living in the Eastern Time Zone. Now, this is quite practical for remote teams who gather employees from Pacific and Eastern time zones.

Let’s go through a simple example. An employee living and working in San Francisco (Pacific Time Zone) gets up at 7 am. For his colleague working in New York City (Eastern Time Zone), this is already 10 am. In a way, Easterners can start their workday a bit later than Pacifiers, and still, they’ll be in line with their Western coast colleagues.

And, what about bedtime? The Jawbone sleep tracker data, published in the Washington Post article, show that people living in the Mountain and Pacific time zones tend to go to bed earlier than those who live in the Eastern Time Zone.

Another point worth noting is that sunset time can vary across the USA. It ranges from 6:05 pm to 6:40 pm. But, since in America there are four time zones, this isn’t a major issue. Different sunset times can be a problem in the countries where there’s only one time zone – such as China. In China, the entire country is in Beijing time. However, the differences between sunrise and sunset times across the country can be up to one hour. Here’s an example of the five biggest Chinese cities and their sunrise and sunset times.

We bet that coworkers from Shanghai and Chongqing don’t usually greet each other with “good morning” or “good evening” during online video calls.

So, why do later sunrise and sunset time cause many problems? That’s because researchers claim that, in the locations where the sun sets later, people tend to go to bed later.

Even if this seems like exaggerations, here’s another fact you should know. When it comes to later bedtimes, researchers say the difference is usually around 19 minutes. So, those who live in an area with a later sunset will approximately go to bed 19 minutes later, compared to those who live in an area with earlier sunsets. If you’re among those from the first category, you should probably avoid doing the math to see what these later bedtimes mean on a yearly basis. Plus, this will only disrupt your much-needed sleep.

Is Spain in the wrong time zone?

If you open a world map, you’ll see that Spain belongs to the same time zone as the UK and Portugal, meridian-wise. Surprisingly, Spain’s not in this, but in the Central European Time zone (CET), like France, Germany, and even Poland, located more than 1,300 miles to the east. The Canary Islands are the only exception because, unlike mainland Spain, they use the Greenwich Mean Time zone (GMT), just like the UK.

In order to change this, there was a parliamentary paper in 2013, which claimed that Spain has to return to the Greenwich Mean Time zone. The key issue they highlighted in this paper is sleep time in Spain. People in Spain sleep 53 minutes less than other European countries because they’re not in the correct time zone. Consequently, employees struggle to stay productive and often work late.

So, how did this happen? Before World War II, Spain was on GMT. However, in 1942, Spanish dictator General Francisco Franco decided to switch their time zone in order to be in line with Nazi Germany. So, Spain has stayed in the CET zone ever since.

How to be more productive in any time zone?

Before starting to blame your time zone for “eating your sleep” and making you less productive, let’s see what each of us can do to improve our effectiveness, regardless of our location. We’ll give you some valuable productivity tips, whether you are in a remote team or working solo, as a freelancer.

If you’re working in a remote team

When working in a remote team whose members are spread all over the world, one of the key issues would be dealing with diverse time zones. But, here’s what you can do to make the most out of this situation.

💡Speaking of teleworking, here’s our list of the best productivity apps for remote teams.

Learn how to collaborate and communicate effectively

Let’s say that you live and work in London and your colleagues in Shanghai. Due to time differences, you won’t be able to work at the same time for more than a few hours per day. That’s perfectly fine as long as you communicate clearly and provide each other with all the crucial information on time.

If you live in London and your colleague from Shanghai depends on you and your task completion, make sure to complete your part of the job before the deadline. Moreover, you can set a reminder for the day before the deadline, so you can make all adjustments and finish the task on time.

In this case, the time difference is seven hours, so when you start working at 9 am, it’s 4 pm for your coworker in China, so he’s almost done with his work for the day. And that’s why you can schedule a quick daily meeting at this moment – it’s a morning call for you in London, but an afternoon call for your Shanghai colleague. This way, you’ll be able to make plans for the rest of your day and for tomorrow.

In general, try to have at least two hours of overlap time so that an entire team can be on the same page when it comes to projects. In the article for Harvard Business Review, Donna Flynn, the Director of the Steelcase Workspace Future, talks about a rotating meeting schedule that works for her remote company. She explains:

“Every month, each team member now has one evening, one mid-day, and one early morning meeting, and misses one meeting that falls in the middle of their night. No team member is expected to attend a team meeting between 10 pm and 7 am.”

Being mindful of employees and their well-being means respecting their sleep time.

Besides, team managers can record meetings for all those workers who haven’t been able to attend.

By using these asynchronous channels of communication, you’ll make sure your colleagues have all the details they need without disrupting their sleep or off-duty time.

This ensures transparency within the team. More importantly, you wouldn’t have to wake up your colleagues in Shanghai when you need some company’s passwords or other significant information.

With so many time zone apps available on the market, there’s no need to calculate time differences by yourself. You can try some of these tools:

Agree on one official time zone

In order to avoid confusion, be sure to agree on only one official time zone within the team. Then, when communicating with each other, always tell the time in that time zone. When using proper time converters, you’ll convert any meeting time into your own time zone with ease.

If you’re a freelancer

If you’re a solo worker, you won’t be dependent on others, so you can choose your own working hours. Here are some tips on how to maximize your productivity, no matter the time zone.

Boost your energy in the morning before work

Finding the motivation to work in the morning can be tough. To help your body and mind wake up, thus prepare yourself for work, you should try taking a quick walk in the morning. Even better, boost your energy with a 30-minute workout or yoga session. This way, you’ll increase your serotonin levels and feel more energized, which will surely improve your productivity.

Plus, if you live in a location where the sun sets earlier, maybe you won’t always have enough time to enjoy daylight after work. Therefore, taking advantage of your mornings will rejuvenate your mind and will ensure you have a productive workday.

You probably know that unpleasant feeling when you have so many tasks to complete by the end of the day, but don’t know where to start. First, think about your priority tasks (3-5 per day) and leave all the others for the rest of the week. Then, organize your daily tasks by using the time blocking technique. Here’s how to do that: 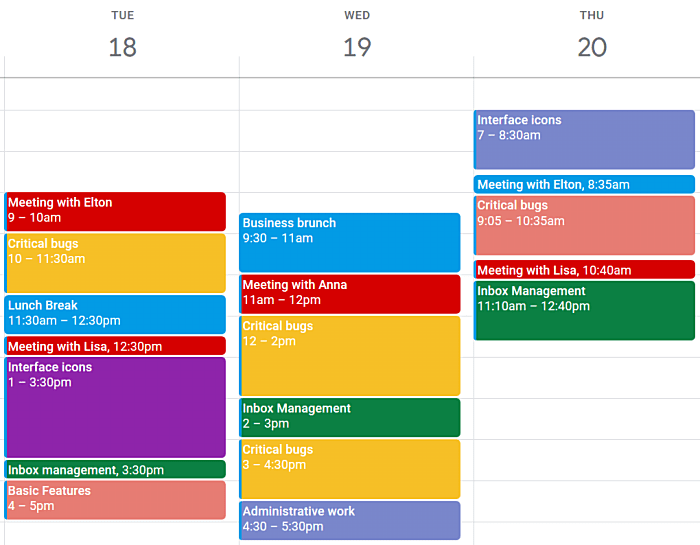 If you want, you can add your lunch breaks to the calendar, too. Seeing a lunch break in the pile of other tasks will put a smile on your face for sure. And, if you live in a location where the sun sets later, use this to your advantage and go outside once your workday is over.

💡In the case you need a more detailed time blocking planner, check out our daily, weekly, and monthly templates.

Choose your working hours and stick to this schedule

As a freelancer, you have the flexibility to work whenever you want. But, if you start working at approximately the same time every day, this schedule will soon become your working routine. More importantly, your brain will get accustomed to this schedule, so when you sit at your desk in the morning, you’ll find it easier to concentrate on work. Therefore, you’ll be more productive as well. So, regardless of your time zone, having a set working schedule will help you stay effective and efficient.

Starting your day well-rested plays a key role in your productivity. And, you’ll need to get enough sleep so that you feel fresh in the first place. Now, when it comes to your bedtime, it depends on the sunset time in your location. Many studies show that in the places where the sun sets later, people are likely to go to sleep later. In addition, some studies claim that employees tend to get up earlier in particular time zones, like Central and Mountain time zones in the USA, unlike workers on the East coast. So, your productivity levels may be influenced by your time zone and the sunset time in your location.

✉️ What kind of productivity issues do you usually experience? How do you deal with them? Send your answers, suggestions, and comments to blogfeedback@clockify.me and we may include them in this or future posts.

About the Author: Ivana Fisic

Ivana Fisic is a time management researcher and writer. She has always been passionate about writing, which is why she has finished her BA in Journalism, at the Faculty of Philosophy, Novi Sad. Ivana is always exploring the new methods of how time management can help you organize your workflow more effectively, as well as how you can increase your productivity.