In which countries people work the most hours? Do we work more or less than a hundred years ago? And does working more hours improve productivity?

Workers now work 20 to 30 hours less every week than in the 19th century.

But this long-term decline in average annual work hours has slowed down in almost all OECD countries, and occasionally reversed itself. Interestingly, the work time in primitive hunter-gatherer societies is much lower than in modern agrarian societies. 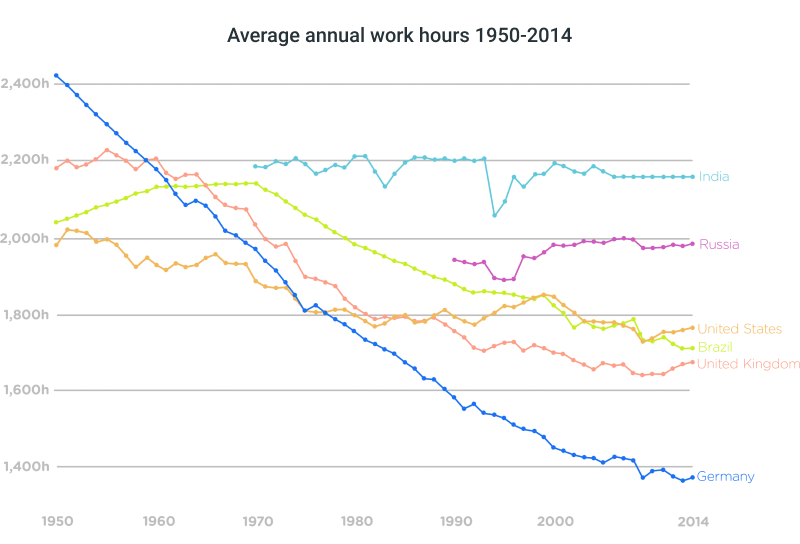 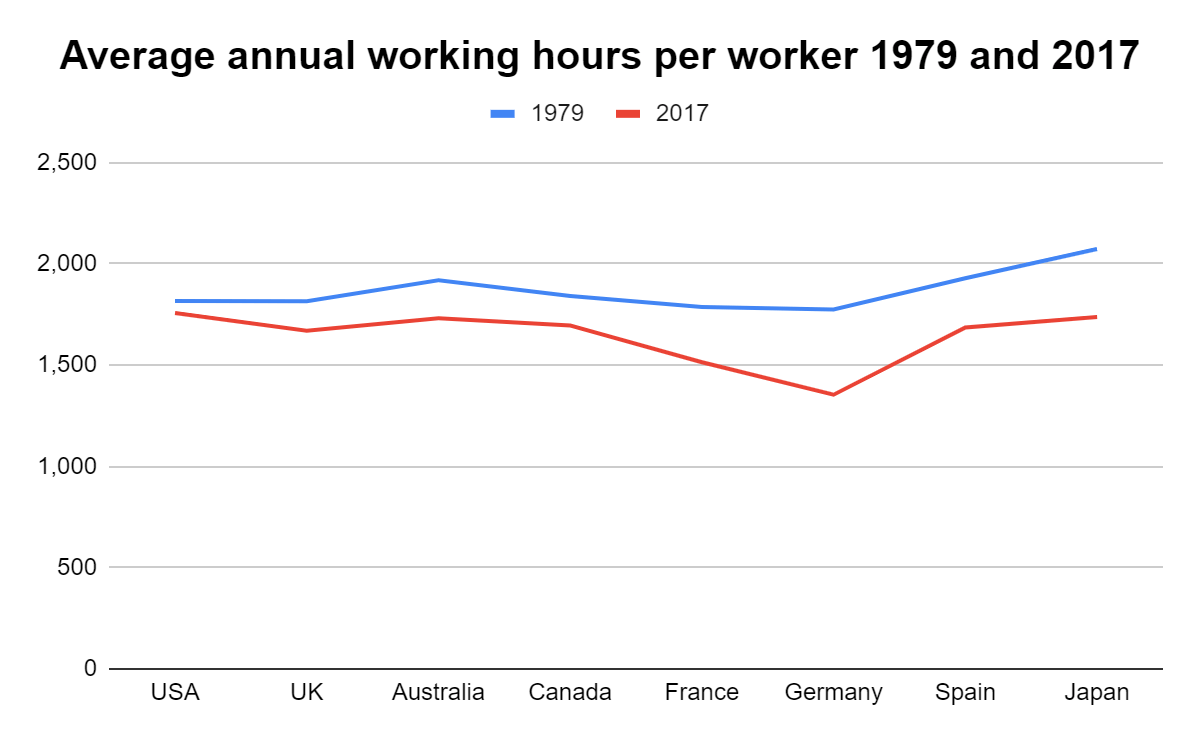 Working hours is time spent in productive activities, whether paid or unpaid. 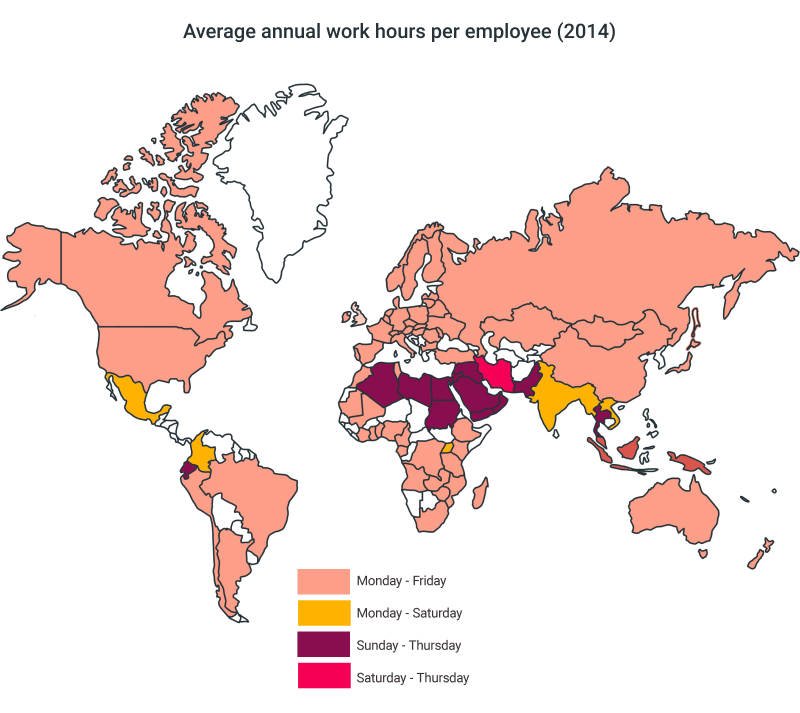 On average, a full-time employee in an OECD country works 37 hours per week. 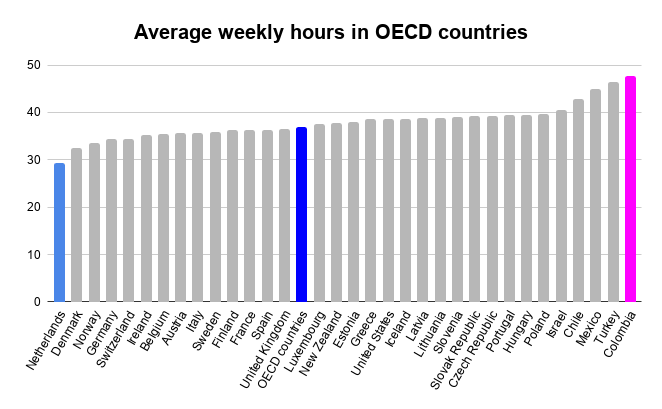 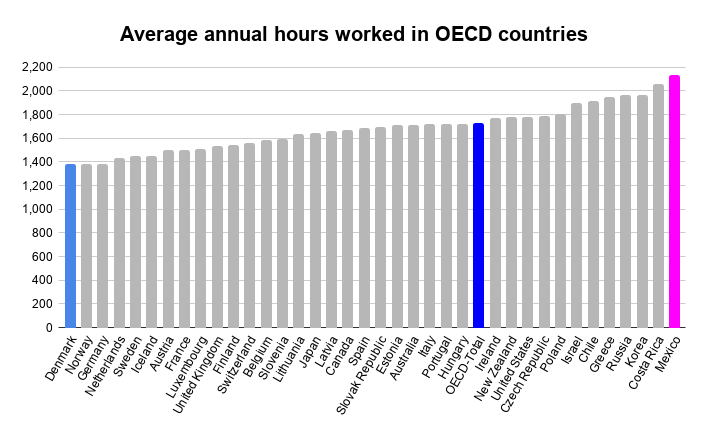 The data were gathered for all EU Member States and the United Kingdom, three EFTA countries (Iceland, Norway and Switzerland), and four candidate countries (Montenegro, North Macedonia, Serbia and Turkey).

By EU labor law,, working hours are limited to 48 hours per week, including overtime (if permitted by national law, you may have an agreement with a staff member to work beyond the 48-hour limit). 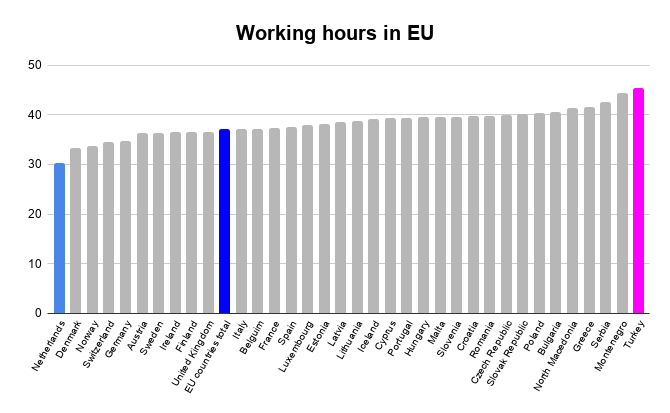 On average, a full-time employee in the United Kingdom works 1,730 hours per year, or 36.04 hours per week. 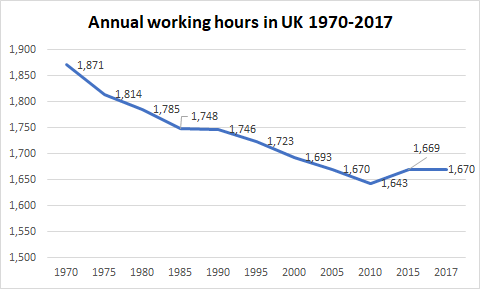 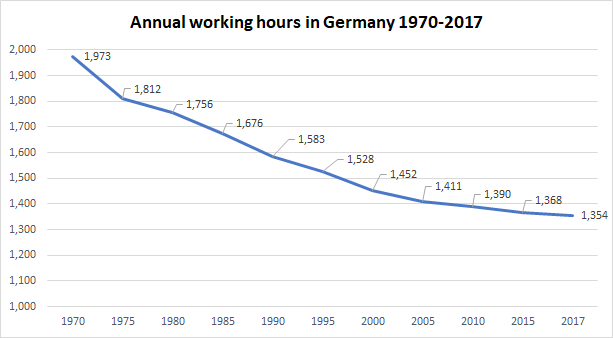 Working hours in US

On average, a full-time employee in the United Stats works 1,801 hours per year, or 37.5 hours per week, which is more than other OECD countries.

For example, Europeans work up to 19 percent fewer hours annually compared to those working in the US. For Americans that's 258 hours extra per year, or about an hour per working day. 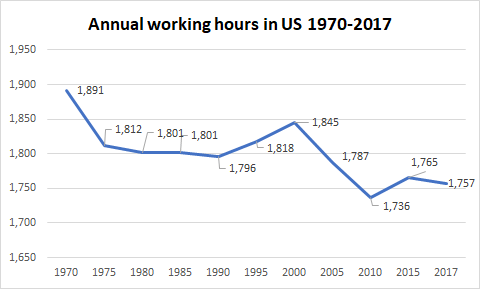 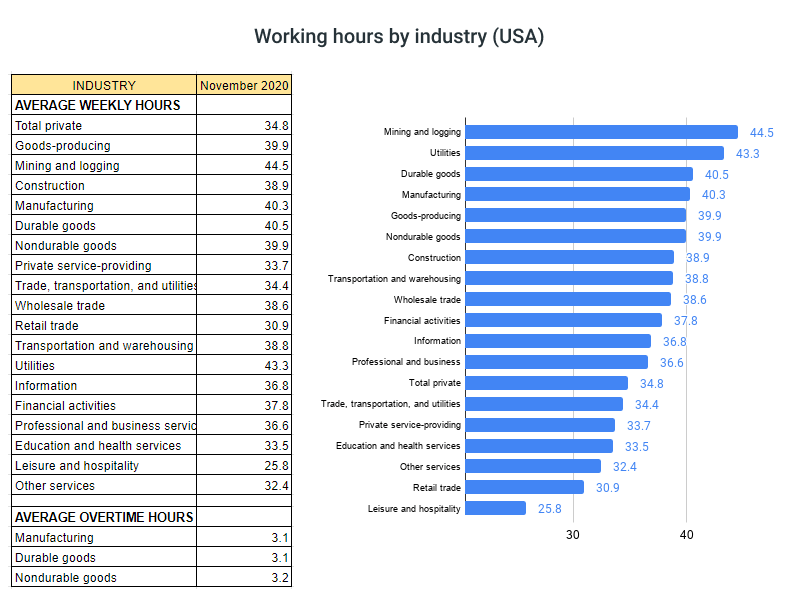 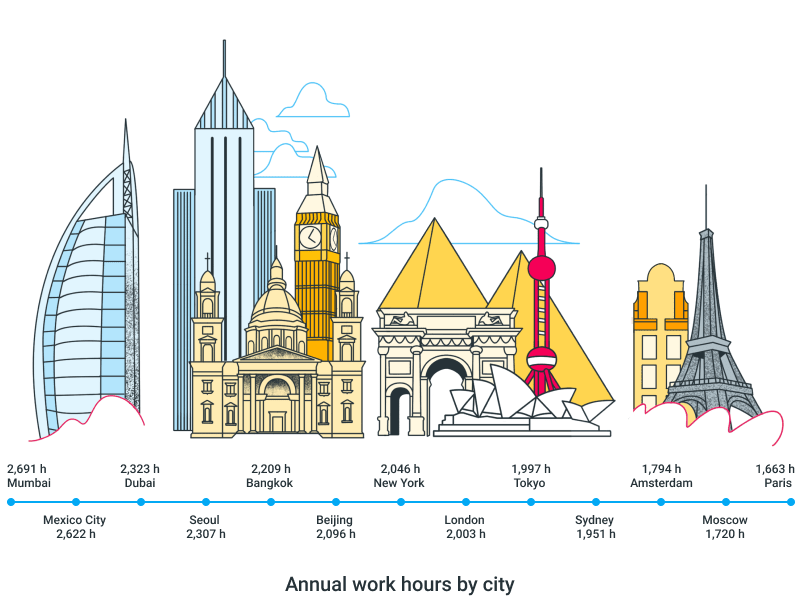 Weekdays and paid time-off by country

Workdays and weekends differ by countries.

In most of the world, the workweek is from Monday to Friday, but not everywhere. For example, in muslim-majority countries, workweek is from Sunday to Thursday. Also, some countries work six days per week and some have a 4-day workweek. 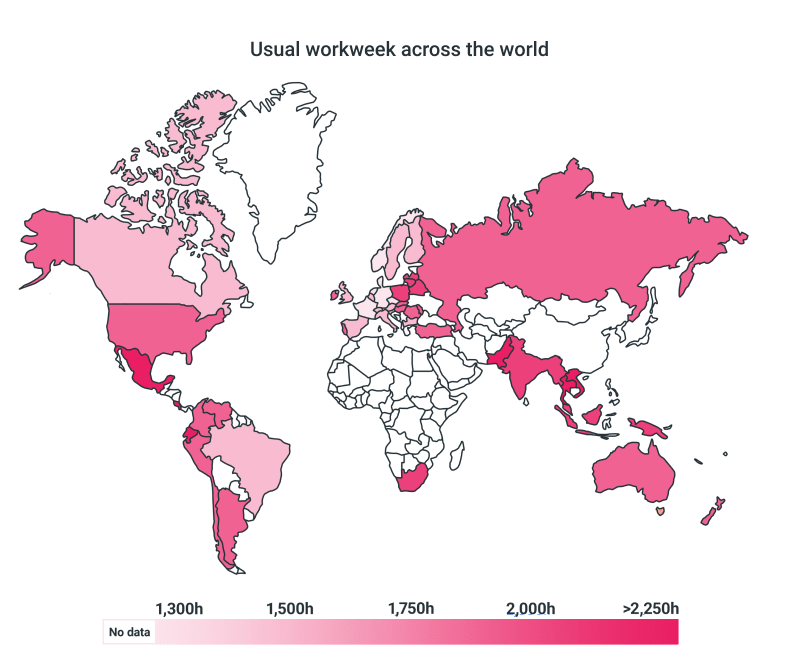 Most of the countries in the world have laws setting the maximum length of the work week, except the United States.

The US is the only industrialized country in the world that has no legally mandated annual leave and does not guarantee its workers paid vacation.

European countries establish legal rights to at least 20 days of paid vacation per year (some even go higher to 25 and even 30 or more days). Australia and New Zealand require employers to grant at least 20 vacation days per year, and Canada and Japan mandate at least 10 paid days off.

In addition to mandated paid annual leave, workers also get paid time off for public holidays. For instance, the US offers none, but most of the rest of the world's rich countries offer at least 6 paid holidays per year (while some countries like Cambodia and Iran offer 27 paid holidays). 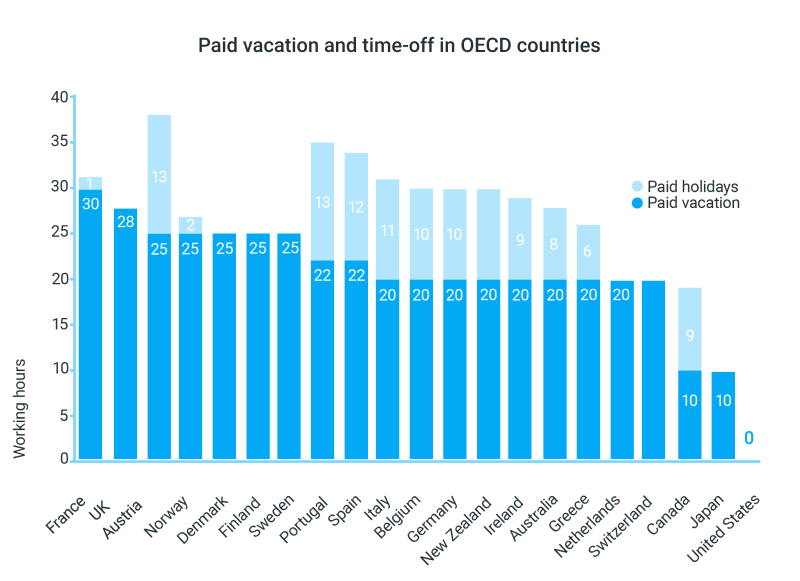 A longer working week does not necessarily result in higher levels of productivity.

For example, workers in Mexico have the longest annual shifts on the planet, but their GDP per hour is among the lowest.

As productivity increases, working hours decrease. For example, employees in Denmark have the lowest annual working hours in the world, but their GDP per hour is among the highest. 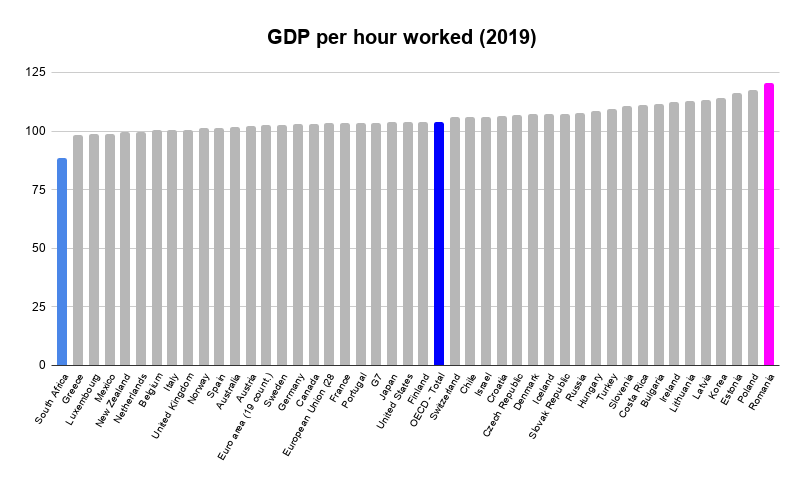 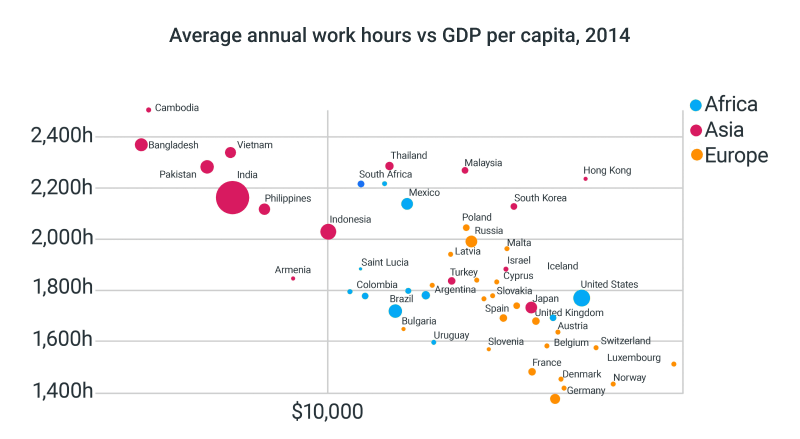 Productivity has been increasing exponentially for more than a century.

An average worker today needs to work a 11h/week to produce as much as one working 40h/week in 1950. But fast productivity growth has not necessarily reduced work time. 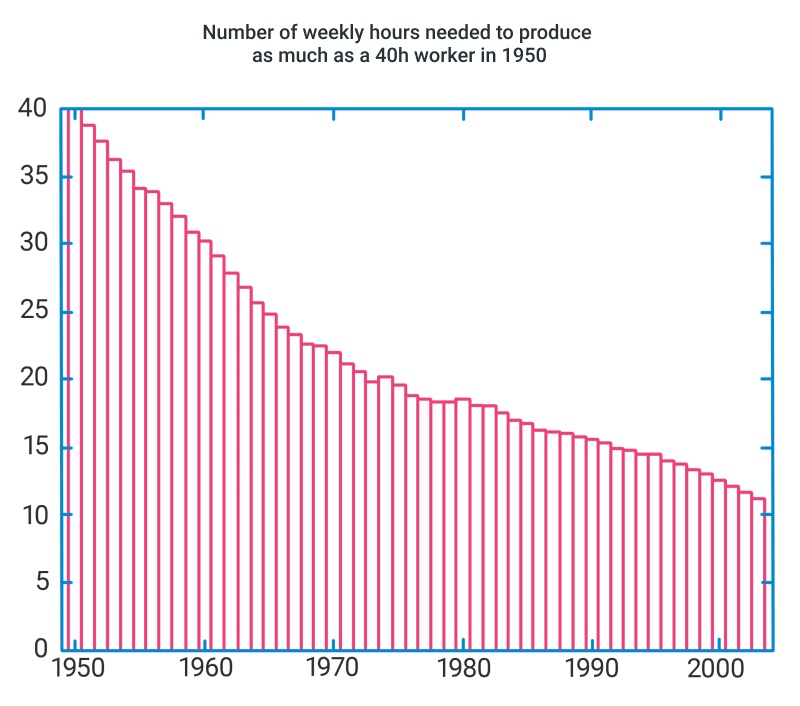 Overtime is legaly regulated by most countries by a combination of regulations and collective bargaining.

For example, in France, Portugal and Spain the influence of legislation is particularly strong; in Denmark, Germany, Italy and the United Kingdom collective bargaining is considerably more important.

Regular overtime is both harmful to workers and unproductive. In contrast, statutory hours limits contribute towards enhancing productivity. Reasonable hours limits help to maintain workers' health and thereby their productive capacity. They also function as an incentive for companies to modernize their work organization, including their working time arrangements, and to invest in improving their technology and enhancing the skills of their management and workforces.

For instance, France has introduced a 35-hour working week as a part of a labour law reform in 2000, where time worked after the standard legal limit of 35 hours is considered overtime. But even though the standard hours worked in a week have been lowered to 35, many occupations demand much more. The French bar association (CNB) says that 44% of lawyers in the country worked 55 hours or more a week in 2008.

The problem of long working hours is often linked with low wages, but not in all cases. For example, people who work more used to earn less, but today the trend is reversing. In 1983, the most poorly paid 20 percent of workers were more likely to put in long work hours than the top paid 20 percent. By 2002, the best-paid 20 percent were twice as likely to work long hours as the bottom 20 percent.