You might be here because you need tips on how to memorize quickly for that test come next week. Or maybe you have a theatre rehearsal coming up and the character lines just won’t stick.

We will offer effective and quick tips for every type of material you need to learn until you find the perfect one. However, we’ll also teach you how to avoid memorization frustration by turning it into a fun, healthy headspace for your brain. 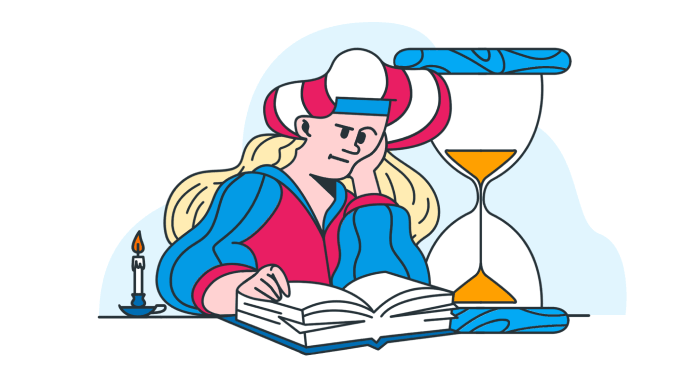 Is memorization a skill?

As harsh as it sounds, we’ve collectively grown too lazy to remember things. And why should we improve our memory, when there’s another tiny brain in the palm of our hand to remember everything for us? Smartphones are getting smarter so we could free up our headspace for other matters.

There’s a universal favorite in brain-related sayings that goes: “Use it, or lose it”. The mind needs to be trained, just like your body.

So yes, memorization is a skill.

The less we try to actively memorize information, the lazier the brain gets. It becomes harder to pick up new skills and study. Not to mention that it sets the groundwork for faster neuron deterioration as we grow older. Even though our minds should be young and quick until old age, we’re facing a universal frustration of struggling to memorize a single phone number or a person’s name way before that.

How to improve memory?

Back in 2017, there was a study that set out to prove how regular people could use strategies devised by memory champions and achieve the same longterm results. Martin Dresler, one of the authors, mentions how even these memorization superhumans actually practice only a few weeks before a competition, for about half an hour to an hour per day. The rest of the time they can practice every once in a while.

However, he also states that no technique is going to help unless you actively commit to it. So, to get the full benefit of the list of strategies we’re about to share, you need to make memorization practice a habit.

For example, whenever it’s time for a mental workout, you can use a stopwatch to see how long it takes you to recall something. To see real results, it’s also good to follow your progress. Nowadays there are plenty of time-tracking apps that offer timesheets and graphs that display your progress over a select timeframe.

Additionally, you can choose one of the numerous habit trackers to ensure you get a little bit of practice every day or every few days.

If you need to force yourself to memorize something, it’s clear your brain has trouble understanding why it’s relevant to your knowledge. This is why every memorization technique comes down to a very simple core guideline: transform a piece of information with no context so it makes sense to you personally.

And given how each brain has its own way of absorbing new information, memorization techniques are countless. In this list, you’ll find some of them, all catering to different ways of learning.

An oft-advised technique for better memorization, especially with exams and language learning is the spaced-out technique.

Hermann Ebbinghaus coined the term “the forgetting curve”. It’s the graphic representation of how our brain forgets information over time unless it is repeated at certain intervals. 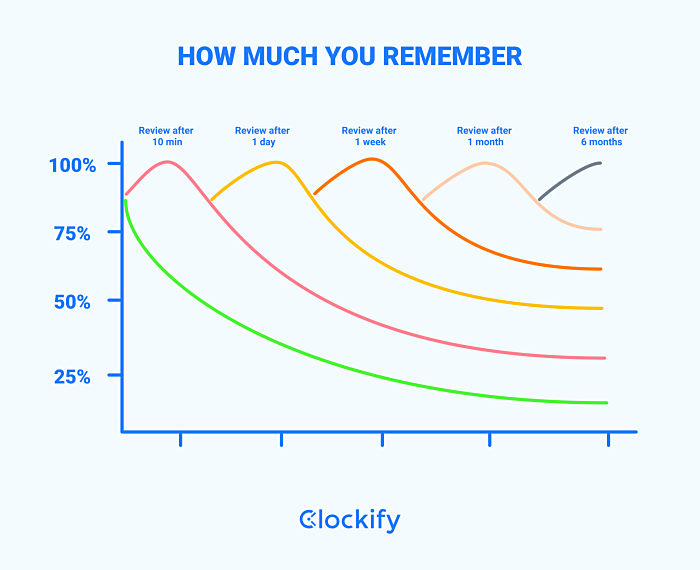 It’s also important that these reviews have a break of a day, two or more between them. As seen in the picture, the longer the gap, the more likely the information will remain memorized.

So, how can you apply it?

You probably have several things going on at the same time that you want to memorize: preparing for a few tests, learning several languages, memorizing more than one poem, and so on.

You can log in into Clockify time tracker and create a memorization plan. Clockify also has a project tracking feature which you can use to make a schedule. Each project can be one subject or language. You then track the time spent memorizing for that particular subject.

After a full week, you’ll have an overview of how much time you’ve spent on each of them, and a schedule that can help you organize your learning time.

Have you ever wondered how theatre actors can memorize pages and pages of text for a two-hour play and not stutter? Well, the secret, as found in a 20-year-long study is in attributing emotions to every dialogue scene. Actors work hard on understanding why a specific character said what he did and try to embody that emotion.

As a memorization technique, you can try to approach your learning material as a story. This proves to be especially useful for history lessons or remembering events. Treat the material as a plotline to a movie, and the people as characters with specific motivations.

Additionally, if you need to memorize lines (whether it IS for a play or an audition), many aspiring actors mention the RehearsalPro app as a good acting partner.

In an article on memorization struggles throughout med school, Shiv Gaglani shared an interesting technique he came by.

He mentions that one of the hardest things medical students and doctors alike have to memorize are the side effects of certain drugs. However, one day, as he was reading the news on the cyclist Lance Armstrong’s then-discovered cancer, he found out that the man refused cancer. The main reason was the active ingredient in the treatment – bleomycin. Bleomycin can cause lung deterioration which, being a passionate athlete, Armstrong was afraid of.

This association cemented bleomycin in Gaglani’s memory. So much so, that it inspired him to create Osmosis for medical school students, but also advises association technique to everyone who isn’t one. If you’re struggling with a particular historical figure, a periodic table element, or the name of a city, associate it with an interesting bit of trivia.

4. King of your memory palace

The third technique on our list is the Memory Palace (Journey Method, or Method of Loci), very well known and used among memory champions. It’s most useful for when you need to remember long lists of words or numbers, like the decimals of Pi, or a shopping list.

The trick here is to imagine a familiar place, like your house or an apartment. Then, you put each item from the list inside the house. Here’s a simple example:

Try to sit back now, and don’t look at the list above. Can you picture the house again, retrace the steps and recall all the items?

By creating outlandish imagery, you go against the brain’s perception of how the real world works. The images stand out, making those items easier to remember.

Some of the things we remember most easily are commercials. Especially if they feature a catchy jingle. Verse mnemonic techniques work much in the same way. The most popular one has to be the good old:

Most kids learned the number of days in a month thanks to it. The same goes for the alphabet, or differentiating the colors of venomous and non-venomous snakes:

“Red and black, safe for Jack. Red and yellow kills a fellow.”

Our brain likes patterns, which makes rhyming a great memorization tool. The only tough part is coming up with a rhyme that suits your material.

6. Laptops off – pencils out

As a rule of thumb, it is often pointed out how writing makes you memorize better. Choosing laptops over note-taking could actually be robbing you of remembering lectures or meetings better.

As we write down lectures or any other spoken/dictated information, we force our minds to filter out which pieces of information are more important than others. You stop being a mere listener and actively participate in absorbing new knowledge.

In contrast, studies show that those who type out their learning material tend to do it word-for-word. Writing, on the other hand, forces one to formulate the learned in their own words.

If the order of items on a list is potentially important, you can use their first letters to make up a sentence. A very well-known example of naming planets in order:

There are cases when we find it particularly hard to remember a word because it sounds awfully familiar to something else. Such words are affectionately dubbed “the confusables”. For example, people often mix up stalactites and stalagmites: which ones rise from the ground, and which ones hang from the cave ceiling.

In an interesting Twitter debate, many users shared their techniques for remembering which is which:

With the techniques like the ones used above, you relate a part of the word to something that makes a logical auditive or visual connection to its meaning (shape of one of the letters, or the sound of the latter part of the word).

9. The good kind of mind games

If your goal is to improve memory for the long term, then turning memory games and practices into a semi-regular habit is crucial. There is an often-quoted sentence “Use it or lose it”, whenever there’s a discussion about enhancing our brainpower. To truly be at its best, not to mention prevent early degradation and illnesses like Alzheimer’s, the brain needs to be challenged.

So, if you want to have a permanently good memory, you need to train it, much like your body. Many advise picking up a musical instrument, signing up for a course, or learning a new language. New experiences create new pathways in the brain’s neural network, keeping it young and active. But, there are also plenty of online resources that can take as little as five minutes out of your day.

We’ve set aside several that are popular among people seeking memorization help.

In short, it’s an app packed with memory and brain training games. There are several game types, increasing levels of difficulty, and even a leaderboard to see how you rack up against your friends and other users.

This is by far the most famous app in the market, currently. Lumosity hasn’t been proven to actually make one smarter, but its mini-games and exercises are guaranteed to keep your brain quick and active.

With a slightly different approach, Neuro Nation assesses your mental strengths and weaknesses to finds areas for improvement, then tracks your progress over time. It also features numerous colorfully designed challenges and for the more competitive types out there: pits your score against other users.

This app is focused completely on memory improvement. It offers various techniques to help you find the one that suits you the most. Additionally, it boasts an AI assistant that can recognize when you’ve actually made a mistake, or simply had a spelling error.

Anki is another memoization-centered software. It was made to accompany you whether you’re learning a new language, memorizing complex formulas, or learning a poem. It has flashcards and strategies for every discipline.

As different as they are, all of these memorization techniques are equally good and valid. The choice mainly comes down to your preferred style of learning and the material that needs to be memorized.

Whichever method you choose, keep in mind that memory improvement doesn’t work as a one-time solution. In the past two decades, we’ve become increasingly reliant on having phones and computers as memorization crutches. But if we understand it as an investment in our future mental health, improving our memory capacity can become another form of self-care. As lazy as technology has made us, it’s also providing us with countless fun and useful tools to get our brains back on track.

About the Author: Marijana Stojanovic

Marijana Stojanovic is an experienced writer with a passion for self-improvement techniques and apps. When she is not trying them out for herself, she is researching the best speakers, teachers, and experts in the fields of productivity and time management to share their knowledge, necessary for survival in the modern professional world.