Do you need help converting employee hours and minutes to decimal time for the sake of payroll? All those decimals can look confusing. Our time-to-decimal calculator is here to help you.
Use it to turn time into decimals in an instant. 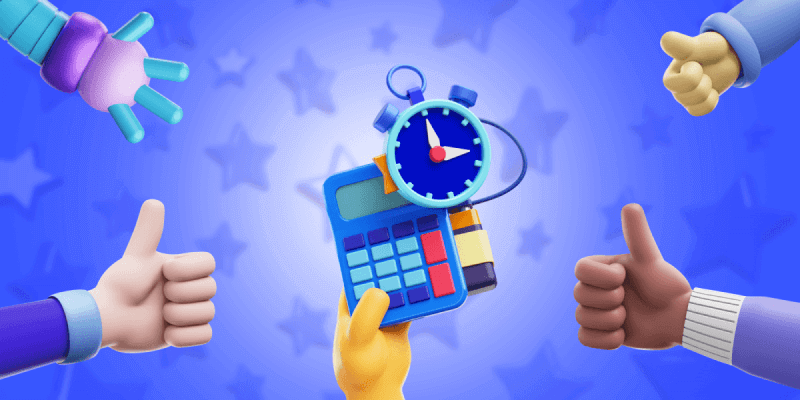 Keeping track of how much time your staff members spend on a project is essential for payroll management.

To keep a record of the time your employees spend on such projects, you can use a time-tracking system that will help you get all the hours in a regular format — HH:MM:SS. However, proper payroll calculation sometimes requires converting working hours to decimals.

So, let’s find out what the decimal time system is and why it is used.

What is the decimal time format and when to use it?

First of all, let’s make a distinction between the decimal and conventional format for displaying time.

The conventional time format is represented in the hours and minutes format.

For example, 5:30 is pronounced as ‘’five hours and thirty minutes’’ which implies that there are:

On the other hand, the decimal hours format represents time as regular decimal numbers.

Let’s explain this further using the aforementioned example, by converting 5:30 to decimal time.

Let’s move on to a brief history class — we’ll go back in time and learn how the decimal time format was invented.

How the decimal time system was invented

Now, how did this time system look like? This is how the French decimal time was divided:

Basically, one decimal hour was equivalent to 2 hours plus 24 minutes in conventional time. Therefore, counting time was made straightforward, for example:

This method of calculating time proved very inconvenient and unpopular. That’s why the French stopped using it after only 17 months — on April 7, 1795.

And that’s when you would think that the French would give up on this idea for good.

However, you’d be wrong. In 1897, the French tried to implement the decimal time system again.

This is what the Commission de Décimalisation du Temps proposed:

Now that you’re familiar with the history of the decimal time system, let’s see how exactly to convert minutes to decimal time.

To convert time into decimal format, you need to divide minutes by 60.

The decimals are rounded, since decimal hours show only two decimal places.

Let’s look at an example chart for converting minutes to decimal hours.

What is a time-to-decimal calculator and how to use it?

A time-to-decimal calculator is a tool that will come in handy when you need to quickly convert your employee's hours and minutes into decimals. In turn, this will help you efficiently determine payroll hours.

Using our time-to-decimal calculator is straightforward — there are just a couple of steps you need to complete:

The calculator will display the results in decimal format.

Now, let’s take a look at how you can use a time-to-decimal calculator. We’ll go through two examples:

How to convert employee time to decimal time using the time-to-decimal calculator?

You need to understand how employee hours are converted into decimal time if you're going to calculate employee pay.

For payroll purposes, minutes are easily converted to decimals. As we already established, all you have to do is divide the number of minutes by 60.

For example — your employee worked 25 hours and 35 minutes per week.

Here's how to do the calculation:

Luckily, with a little help from our calculator, this will be calculated automatically.

Converting employee time to decimal time helps you figure out the amount you need to pay your staff, which we’ll cover in the following lines.

How to calculate employee pay using the time-to-decimal calculator?

To calculate how much you should pay your staff, add the employee's hourly rate to the time in decimal hours to determine their gross pay.

If you don’t want to deal with such calculations, you can use our time-to-decimal calculator. Just enter the time values in hours and minutes and hourly rate, and let the calculator do the work for you — you’ll have your employees’ working time expressed in decimals in an instant.

Beside using decimal time for payroll purposes, there are two more examples of the decimal-time implementation:

A stardate is a fictional pseudo-decimal timekeeping system created for the Star Trek television and film franchises. The stardates in Star Trek were derived from the Julian system of the sixteenth century. The writers were told to choose four digits and a decimal for the original Star Trek series.

The Stardate calculator will help you convert any conventional date into a stardate.

It was supposed to be a more straightforward form of global cooperation over the internet, since it lacked time zones. The official format involves inserting a @ sign before the current .beat and ranges from @000 to @1000 .beats daily.

You may encounter a few extra minutes each day while determining how much to pay an employee. Eventually, those little bits of time may significantly mount up.

Apart from using out time-to-decimal calculator, you can also try Clockify to track every minute of an employee's time, and be able to handle payroll correctly.

Always track the time your employees have spent working on a specific project by utilizing a proper time tracking app. With Clockify, employees can track time by:

Learn more about avoiding timesheet-mistakes and the proper way for filling in your time reports: How to minimize mistakes in timesheets | How to fill in time reports for work