What are the average hourly rates that consultants and freelancers charge these days? And depending on your industry, location, and experience - do you charge enough?

There are various factors that determine freelance and consulting hourly rates. Here are the most important ones, ordered by level of impact:

According to the Payoneer survey, which covered 150 countries and over 7,000 freelancers around the world, freelancers on average make $21/hour.

Freelancers around the world charge the following hourly rates: 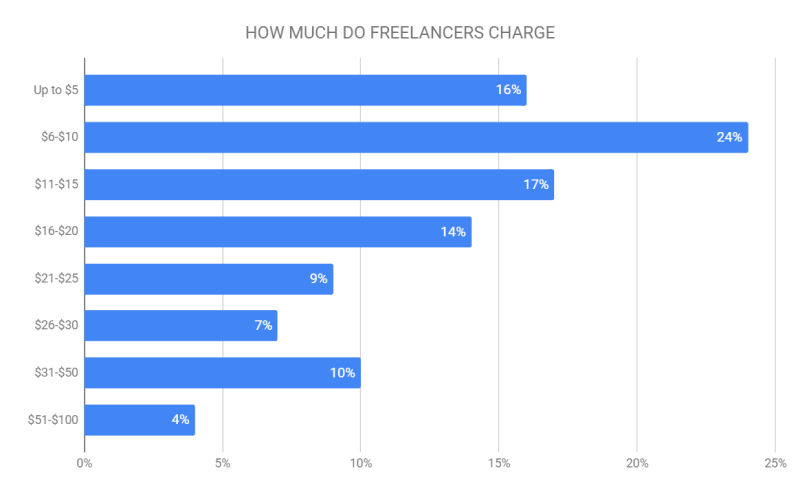 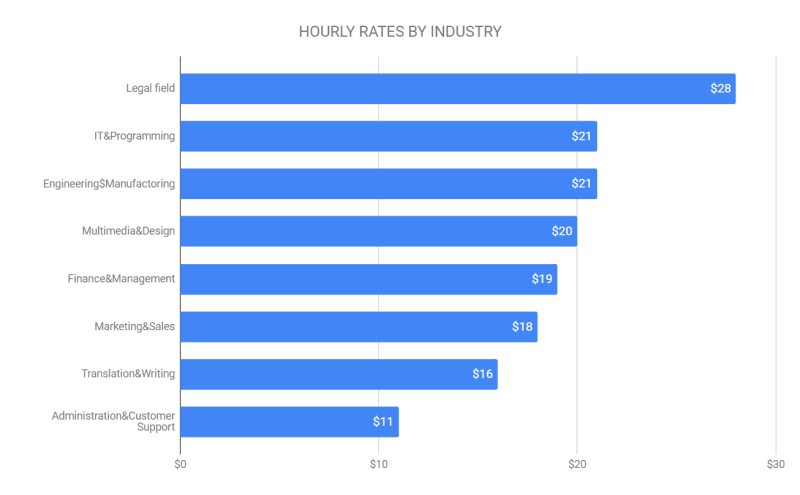 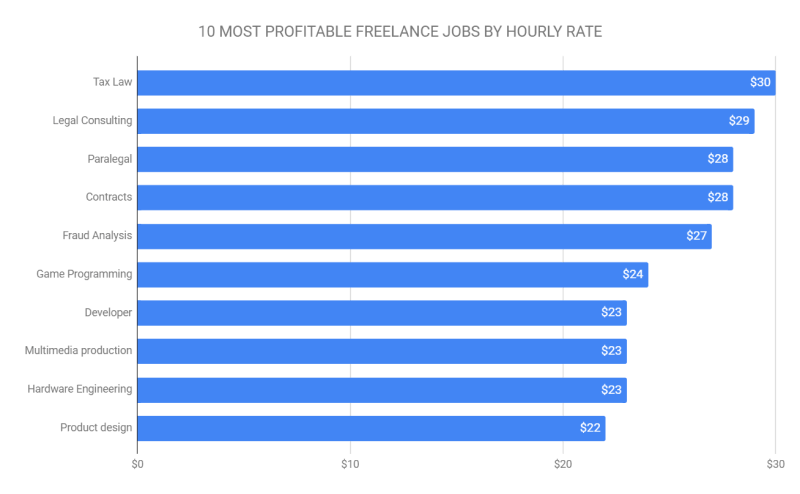 The most profitable industry is the Legal field, with all 5 of its listed jobs being in the top 5 best paying freelance jobs. The freelance job that pays the most is Tax Lawyer ($30/hour). 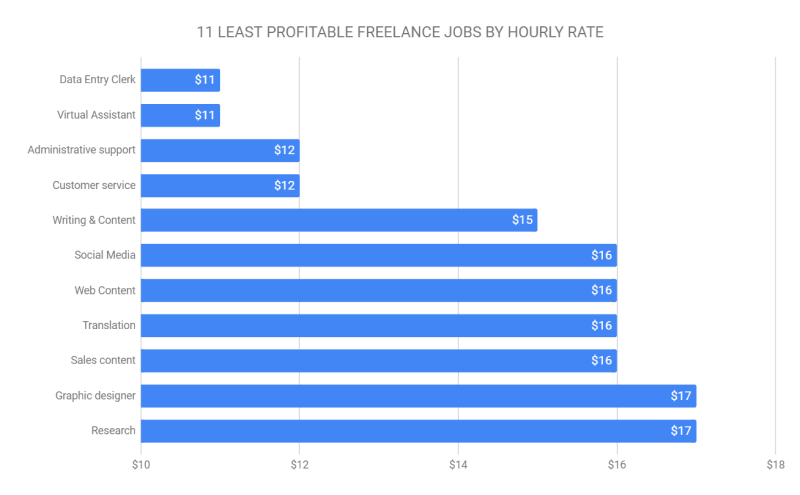 The least profitable industry is Customer & Administrative support, with all 4 of its listed jobs being the bottom paying freelance jobs. The freelance job that pays the least is Data Entry Clerk ($13/hour).

These industry figures include freelancers all over the world, and as a comparison, here are the higher end minimum hourly wages for full-time employees around the world: 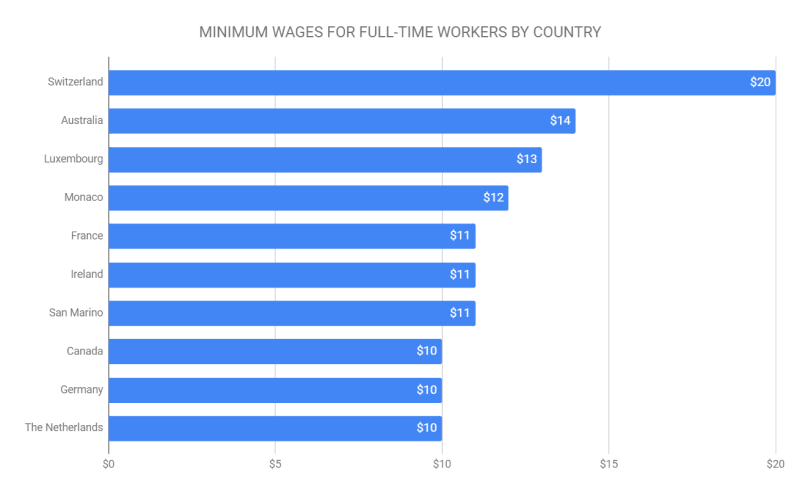 These figures show us that, apart from Switzerland's minimum wage (which is only applicable to one part of the country), freelancer average figures are mostly higher than the minimum wages in countries with the highest minimum wages - one survey shows that freelance work in general pays off more than full-time employment.

Certain jobs in certain industries are more likely to involve special parameters, so according to these parameters, we also distinguish between:

Remote positions don't involve commuting and other activities that require additional expenses for the employer, so people usually think these positions pay less.

But, there are some remote positions that actually pay well, according to this report on remote work trends, that discloses the following figures: 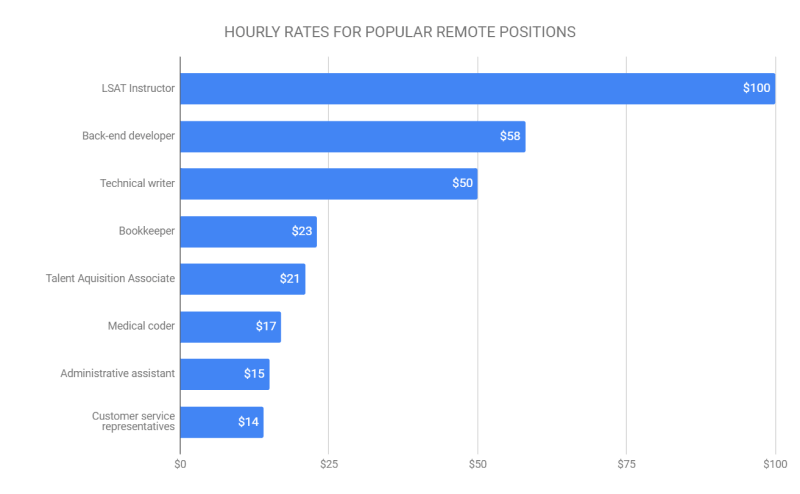 According to the report, the highest paid remote freelance position is a post-secondary, LSAT instructor, a position that can earn up to $100/hour; the lowest items in the list are Customer service representatives, with $14/hour on average.

Effect of COVID-19 on remote work

With the Covid-19 crisis in the first quarter of 2020, there has been a resurgence in the number of remote employees. In a study conducted by Upwork, there has been a staggering 87% increase in telecommuters from the pre-pandemic period. As they assess, remote work will only continue throughout 2021.

The contracts of temporary workers involve a limited period of time, usually based on the requirements of the company who is performing the hiring. These temporary employments include:

They also include certain jobs from the following industries:

The most profitable temporary job from each category is:

When it comes to temporary positions, the position of a Application Software Developers (IT) pays the most ($48/hour) - this industry is also the most profitable one in terms of temporary employment. 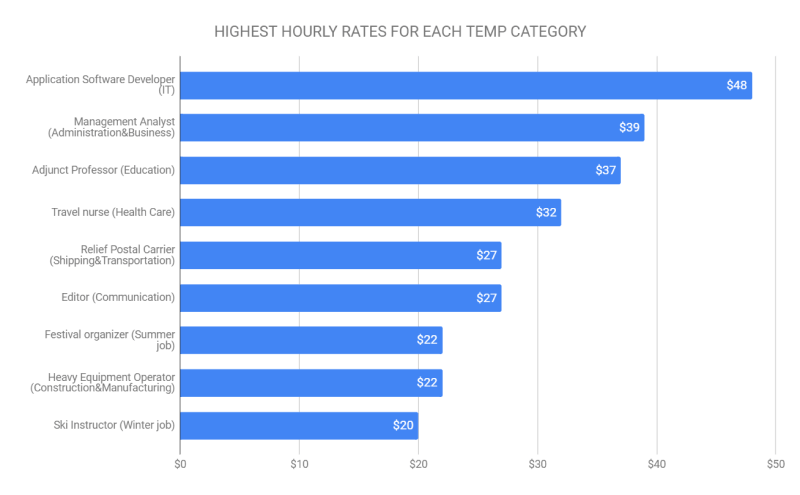 The least profitable temporary job from each category is:

When it comes to temporary positions, a Resort staff member and Santa Clause position pay the least ($10/hour) - Summer and Winter jobs are also the least profitable categories in temporary employment, most likely because they are strictly seasonal jobs, with no possibilities for contract extension beyond their seasons. 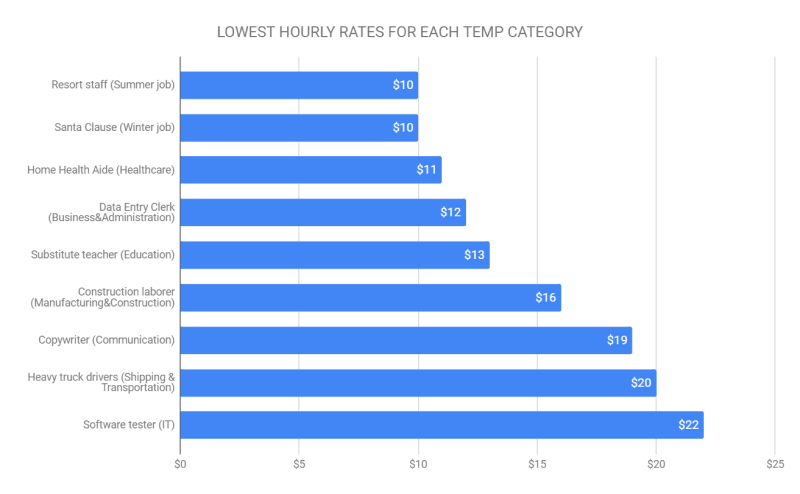 For more details on temporary employment and its hourly rates, visit this report.

Industries are the main factor that determines freelance/consulting rates, but there are several other factors that modify rates per industry:

The world region and country you're living in are one of the biggest factors that determine your hourly rates.

The regions where English is a native language are usually in advantage when it comes to hourly rates. This is especially a factor in the industries that require fluency in the English language - clients are more likely to hire professionals whose native language is English, so these professionals are in the position to command higher rates.

This is the case with developers -according to a survey of freelancers around the world, workers from the United States, Australia, New Zealand and Canada command the highest rates, while developers from North Africa get paid the least:

Disclaimer: The data validity was checked on several different websites. It is important to note that hourly rates differ vastly between different states (like in the U.S. or Latin America, for example). We've presented the average here, but the exact rates will vary based on the state, education and seniority level. 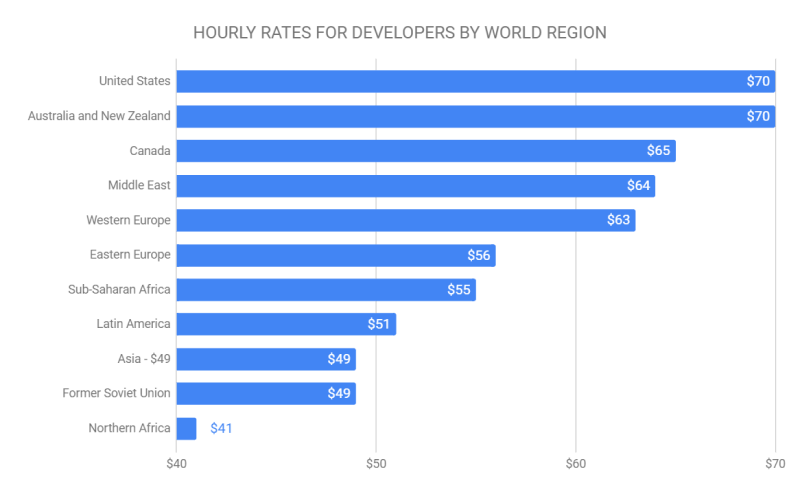 Apart from the world region, the country you're living in determines the hourly rates as well. Again, English speaking countries usually reign in terms of the highest hourly rates. 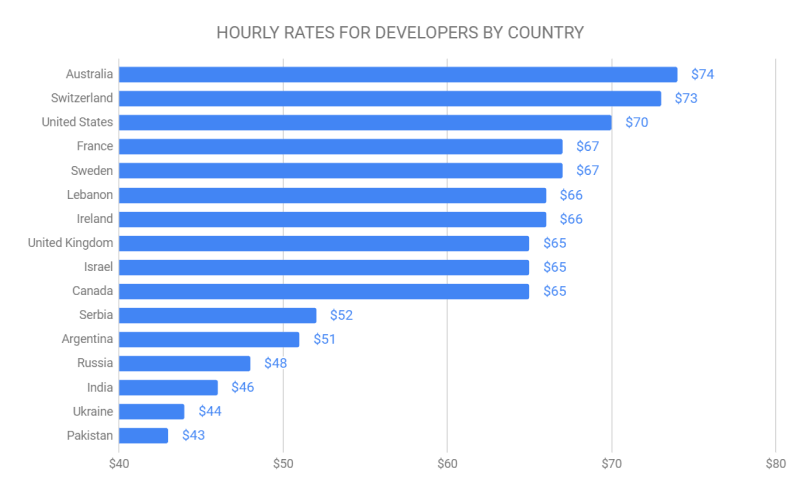 The reports by PayScale show how the hourly figures for most of the same countries (no data available for Serbia and Ukraine) stack up, for graphic designers: 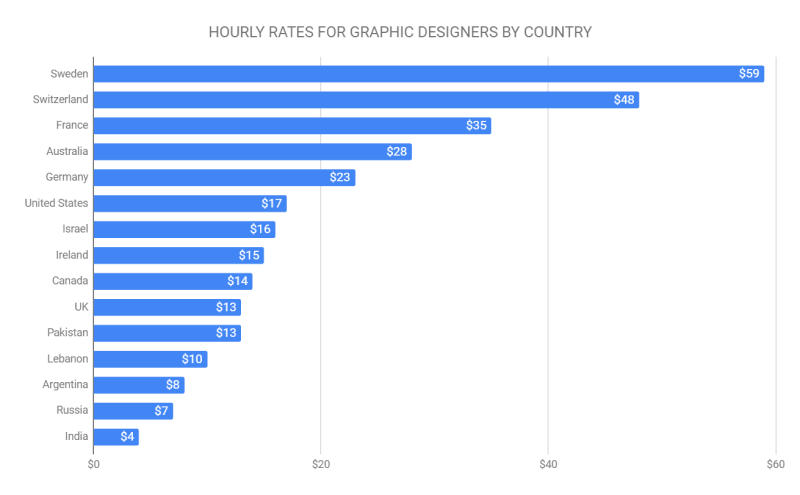 The figures for graphics designers show that Switzerland($48/hour) and Australia ($28/hour) are once again high on the list, while Sweden ($59/hour) offers the highest rates. In comparison to its position on the developers' list, Pakistan has a better position, and evens with the UK ($13/hour). Russia is once again low on the list ($7/hour), but it's India who offers the lowest rate ($4/hour).

Hourly rates by skill level and years of experience

Skills and experience are a vital factor in determining your hourly rates - as an example, here's how the figures unfold for developers and graphic designers across various experience levels:

Entry-level employees have up to 1 year in experience - because they lack extensive professional experience, their hourly rates are typically lower.

Intermediate developers usually have up from 1 to 3 years of experience, and, on average, make the following figures:

Senior developers have 3 to 5 years of experience, and make the following average figures:

Developer Lead and Senior Staff specialists have 5 to 10 years of experience, and, on average, make the following figures:

Developers usually move to consulting positions after 10+ years of experience, and, on average, make the following figures:

Designers on consulting positions, on average, make the following figures:

According to the Payoneer survey, developers who have the knowledge in a particular developing language have the following years of experience in developing (though not necessarily in the language listed): 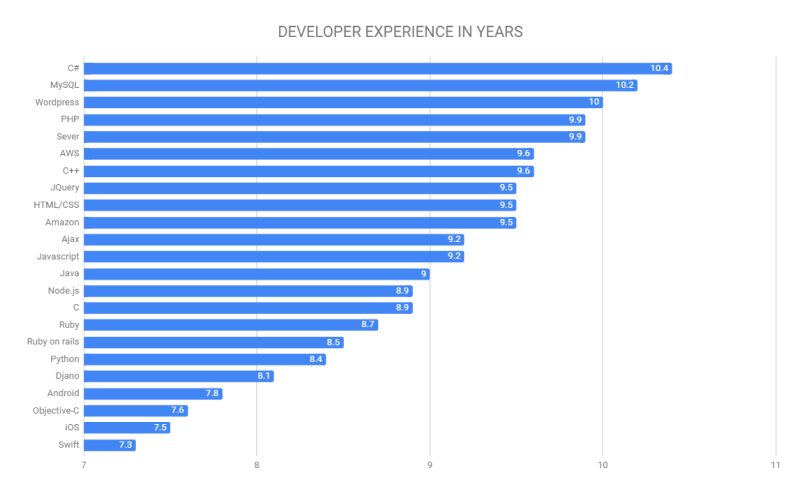 This table shows that all the surveyed developers who have knowledge in a particular language, have more than 7 years of experience.

Additionally, in Payoneer's most recent survey the rising popularity of IT freelance work doesn't necessarily mean high pay rates. In fact, the market is slowly becoming oversaturated, which affects the mean hourly rate. 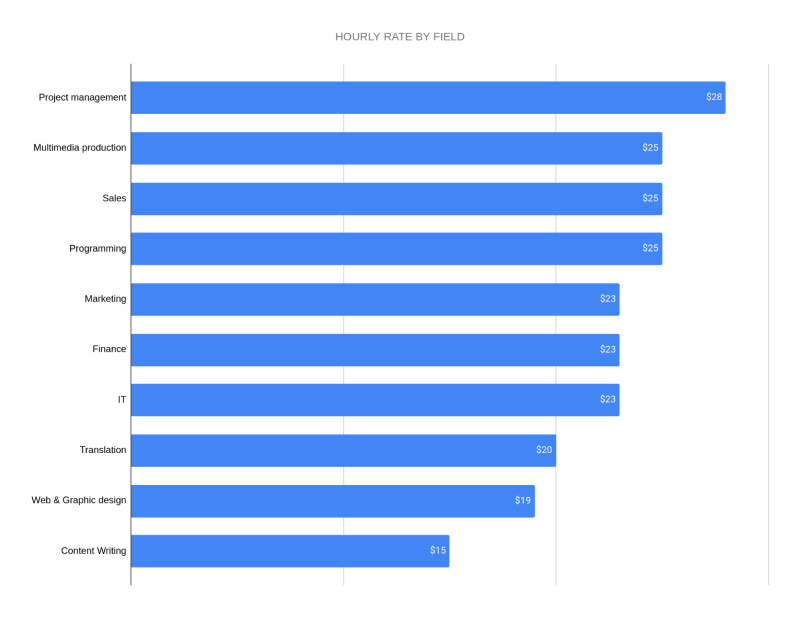 Education can be an important factor for clients who are looking to hire a freelance, but the most recent Payoneer report shows that clients actually value experience and competence more than education.

College makes a difference only at later stages of your education - freelancers with Master's and Ph.D. degrees command higher hourly rates than other freelancers: 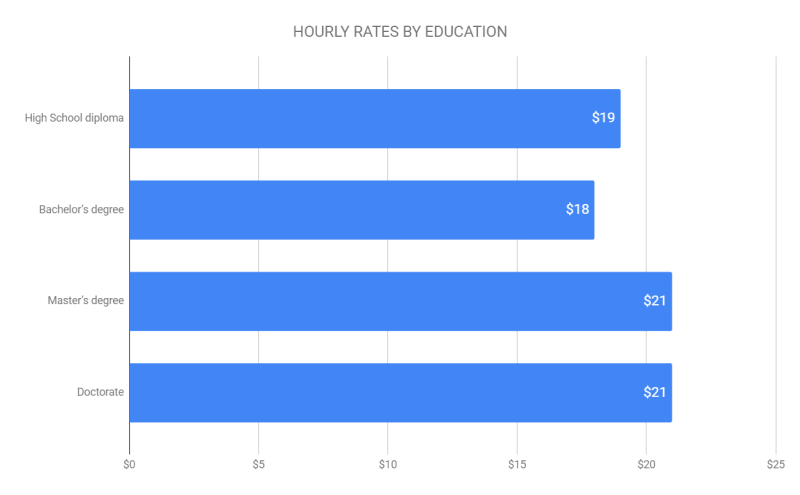 If you're still haven't earned your high school diploma, freelancing isn't out of reach - but, as you're probably still learning your freelance skills and don't have an extensive portfolio, expect to make around the equivalent of the minimum wage in your country.

For specific rates per field of study, you can visit Payscale.com and their thoroughly-researched archives.

Although the idea of closing the gender pay gap is a popular one, the results of the Payoneer survey indicate that the gap persists despite many who speak against it - men still outearn women in all surveyed industries.

On average, freelance men earn $21, and freelancer women earn $18, though the actual figures vary by industry once again: 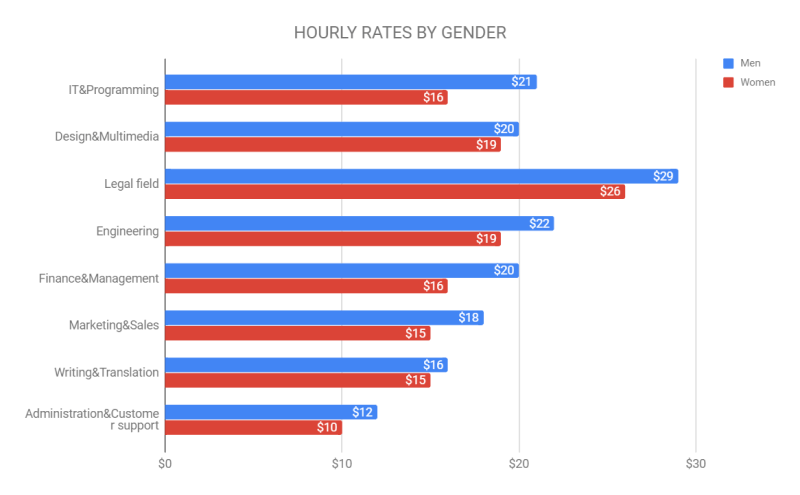 The table shows that men outearn women for $3 on average across industries - the only two industries where the difference is minimal ($1) are Design & Multimedia and Writing & Translation. The biggest difference ($14) is in the field of IT & Programming, where men earn $31 and women $17.

However, it also shows that women earn more than men in Marketing and Multimedia Production.

However, despite the gender pay gap being a norm in most of the world, the percentage of hourly pay women earn seems to vary significantly.

Concerning the estimates when the gender pay gap might finally close, one study shows that women will start earning the same in the USA decades from now, with the gender gap being the slowest to close in Wyoming (144 years from now).

In addition, the World Economic Forum estimates that women around the world will have to wait 217 years for the gender pay gap to fully close.

Remote positions and temporary jobs offer substantial income, with the IT industry once again coming out on top (with remote back-end developers earning on average $58/h, and Application Software Developers being the highest paying temporary positions, with $48/h).

Again, Customer Services come out at the bottom of the list, with the lowest ranking for remote positions (Administrative assistant - $16/h; Customer service representative - $15/h). However, this industry ranks better in the temporary jobs category, with Summer and Winter jobs taking last place (Resort staff member and Santa Clause - $10/h).

Location is a vital factor that determines hourly rates: for developers, the difference between the highest paid (France) and lowest paid region (Northern Africa) is $62.

Having the right skills and experience is more important than education - the difference between people who finished only high school and those with Doctorates is negligible, being only $2. Bachelor degree doesn't up the hourly rates - they are actually lower than for high-school graduates.

The difference between what freelance men and freelance women earn is smaller, but still unfortunately present worldwide - on average, it's $3.

Clockify lets you track how much time you spend working on projects and automatically calculates your earnings based on your hourly rates.

How to calculate billable hours with Clockify →